not only do I appreciate the colors...

i think it's beautiful what you wrote and to think about. rainbows have always given me hope.

The colors of a rainbow are Roy G. Biv.

I've seen a triple rainbow in CO once.

It don't mean a thing if it ain't got that swing.

I remember Craig teaching that the gay supporter rainbows are devilish because they only show 6 colors of the rainbow when it really has a Godly 7 colors.

Isn't one of those colors invisible to the naked eye? I've tried to count them several times and I only see 6 or many more than 7 depending on how they "blend".

I think the colors of a double rainbow are:

Just curious, were you in the air when you saw the triple?

Or on a mountain or something?

I've wondered about the 7-vs-6-colors thing too (not cuz of LCM's words. I never even heard that til now). There does seem a puzzle among colorists about how many colors there really are.

A color-wheel has 3 primary colors and 3 secondary colors where the primaries overlap. According to this, the two shades of purple on a rainbow are really just two shades of a single color (for some reason).

But maybe 7 colors make more sense on a double rainbow than a single, because the MID POINT between the TWO rainbows is actually CLEAR, which is really then BLUE sky where the last band of PURPLE unravels and overlaps the blue sky at the middle/inside of the spectrum. Hence, a bluish-purple violet/indigo quandry.

Either that, or my memory is bad and red is the inner-most color, and my whole theory just jumped backwards out its own ***.

But I DO at least remember the colors of a double being inverse in order.

This one's for you:

As dusk and dawn remind us

Of the life and death of our days

The winking sun assures us

Of a secret bridge, gate and way

For while that star lingers

Against quiet ocean and mirror beach,

Hope is never a secret,

And is where every eye can see.

One time, when I was on a flight somewhere, I saw a circular rainbow. It was so cool.

And, Zix, if you look 4 posts above yours, you'll see that I already posted about Roy G. Biv.

Thank you for posting about Roy G. Biv. First time I ever heard that. I swear you can learn something new everyday. BTW I think its cool how you call yourself Steve! Whenever I see your name it isn't like "oh, its Steve" its like "hey, its STEVE!"

rainbows are one of my favorits...you know the pot of gold at the end of the rainbow thing?i always thought they said that cuz you can never get to the end.but my dad insists that when he was young,he stood right inside of a rainbow.(this was before lsd,but my dad is deffintly not normal).this is imposible,no?

i would love to stand right inside a rainbow

Sir guess, I think the colors of a double rainbow are in the same roy g biv order, not in reverse. I don't think I was on a mountain, as in on top, but I was high in altitude.

Didn't the rainbow in the "men in tights" Athletes of the Spirit prod just add something fabulous to it all.

It don't mean a thing if it ain't got that swing.

I think they are reverse.

This site has an artist's rendition, in which the violet is on the inside.

But I found that this is the wrong order once I found these other two sites:

This one is a photograph, and it appears that the red is on the inside for both rainbows.

These questions were answered by a meteorologist.

Rainbows are produced when sunlight is reflected and refracted by raindrops in a manner similar to the refraction occurring when light passes through a prism. The light rays making up the main, or primary, rainbow experience single internal reflection from the back surfaces of the drops. The light composing the secondary bow undergoes two reflections from the raindrops. As you know from looking in a mirror, the action of reflection is to cause an inversion of an image. Your right hand appears to be your left hand. The second reflection in a raindrop reverses the order of the colors in the rainbow. In rare cases, you can see a very weak third bow. It is explained by three reflections and exhibits the same order of colors as does the primary bow. At each reflection, only part of the incident light is actually reflected, therefore, the more the reflections, the less bright the bow.

Then I found this site:

Nice shot on this one!

Reminds me of that cliche about only being able to feed each other in heaven.

You can only stand in your friend's rainbow. 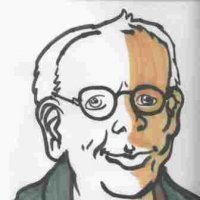 You caught my attention.

You can see a full circle rainbow by riding in an airplane above lots of clouds.

If you can position yourself to look exactly opposite the sun, and if there are clouds when you look in that direction, you'll see the shadow of the airplane on the clouds.

The airplane's shadow will have a full circle rainbow surrounding it. It's beautiful!

This is wrong. Multiple rainbows occur from multiple reflections and refractions through the atmosphere. Harmonics are in no way involved since the visible portion of the spectrum subtends less than a full octave of frequencies.

If you?ve checked into it recently I?ll take your word for it.

You?re probably correct. It's been 35 years since I saw the diagrams and the equations cranked. I think it was second year physics. When you said: ?the visible portion of the spectrum subtends less than a full octave of frequencies? you got my attention most efficiently.

My memory of it, what's left of it and isn't degraded or falsely planted, is this:

White light reflects back and forth within each raindrop. The raindrop?s dimensions are of the order of the light?s wavelengths. Differing harmonics of colors will geometrically gang up with each other and against each other in constructive and destructive interference (sounds like Grease Spot) giving rise to the higher order rainbows. This is admittedly a very crude grasp, but it?s I all I have on this subject.

When I posted, I had a stronger phrase in there that I quickly edited out. I watered down my statement to: ?happens somewhat the same way? and even considered adding the word ?maybe.? I should have.

I put all my rainbow investigations into the ?Finished? folder when I happened to visit Niagara Falls in 1969. I had a fresh memory then of the diagrams and equations, and at the falls I could see many near complete full circle rainbows at times and from certain locations, especially when wind gusted up and the water sprayed in the air more. I?ve not looked at them since, so I?m interested in efficient, neat bundles of summation like your ??the visible portion of the spectrum subtends less than a full octave of frequencies?? statement. It skips around the need for diagrams and equations.

One thing I did retain from rainbow physics is this. It?s easy to predict rainbows.

Zixar, I?m sure you know this, so for the other rainbow lovers out there, it can really easy and fun to predict rainbows. You can also help get someone interested in this beautiful subject?s physics if you say ?I?ll bet there?s a rainbow behind that building!? and sure enough, walking around and WOW! There it is! Then you can explain to your friend how to predict them. Kids can be taught these simple points in prediction, and they can be motivated to pay attention to science from the enjoyment.

Here?s how to predict rainbows:

They happen MUCH more likely when the sun is lower in the sky, morning or afternoon. Noon is impossible almost, I think. (maybe, possibly)

As pointed out by sirguessalot, they are in the opposite direction as the sun approximately. The center of the rainbow is exactly opposite the sun. Let?s call this the ?sun-opposite? region of the sky. This region is also somewhat lower in the sky. Not straight up.

There needs to be water, or mist, or clouds, or gloominess in the ?sun-opposite? region of the sky.

So, if you can see that there?s rain on the whole region on the other side of that building, and there's strong sun in the opposite direction as the building, the time invested in a walk around the building is well worth it.

But are these reflections left-right reversals, or up-down reversals?

I'm going to have to dodge that question.

Really, though, I've GOT to go to work! HONEST!

I hope this doesn't reflect poorly upon me!

Harmonics are integer multiples of a given frequency. The lowest possible visible frequency (dark red) has a wavelength of about 700 nanometers. When you double the frequency, you halve the wavelength. Thus, the first possible harmonic of that color is at 350nm, which is, unfortunately, fifty nanometers into the invisible ultraviolet potion of the spectrum.

I believed you the first time, and could could see it qualitatively. Now, you've repeated it quantitatively.

So, thanks for the numbers. The orders of magnitude of these things are far from my memory, and somewhat far from retrieval in my books. Even the books are far, some of them.