Where are we fellowshipping now?

Hi Doug. I'm Dan Haas. If you're not near any "splinter groups," I would say you're lucky. There's a lot of Waybrain to overcome (and a lot that was taught in the Way was very good, in my opinion). You appear to feel the same. Anyway, I don't know if you're a reader, but there are a lot of wonderful books on biblical research by F. F. Bruce, Dallas Willard, Fee and Stewart (How to Read the Bible for All Its Worth) and Bruce M. Metzger, and many more. Speaking strictly for myself, one of the greatest leaps of growth was when I began to realize how important the Gospels are. They were written AFTER the Church Epistles, you know. Disconnecting ourselves from the teachings of Jesus as "not addressed to us" is a huge impediment to what you're looking for -- fellowship. It starts with God and His Son.... "that you might have fellowship with us, and truly our fellowship is with the Father, and with His Son Jesus Christ." Secondly, FOR ME, getting to know Jesus as Lord by doing the things he says was a big step forward to him actually being Lord. "Why do you call me lord, and not do the things that I say?"

If your current church doesn't seem like the place where you can really grow, go to a different one each week, and also during the week to bible studies that many churches offer, often in members' homes. There is so much to learn once you're out. I'm glad you're here, too, and I also have made some wonderful friends already. I'm sure you'll get many different takes on the subject. This is just mine. PM me or email me if there's anything you'd like to talk about.

First order's on the house! What can I get you? 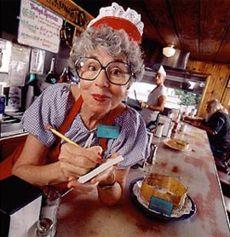 I do several things, actually. :)

I attend a small Methodist Church every once in a while. I attend a few www.meetup.com groups that like to study, research and talk about some of the same things I do. I participate in the Doctrinal discussions here at the cafe occasionally, usually I just lurk down there but I've certainly learned a great deal from our resident experts. I also subscribe to a couple of "religious" magazines.

Each "place" provides a bit of what I need and want. I kinda like it that way - not tied to any one group and not expecting one group/person/people to be everything I need.

Belle, that picture is precious!

Thanks, Dan. :) We aim to please here at the cafe.

BTW, your milkshake is ready....

Service with a smile! Thanks! I needed that!

Hello all. I am just curious as to where most people go to fellowship after the Way.

I don't think that there is a "most". Folks go where they find what they want. That might range from a TWI clone to the church of their youth to a coven to...nothing.

Hi Doug and welcome. We tried different churches but it didn't work for us so we have fellowship in our home with a group of people.

Right now we are studying Galatians and learning that there are 5 Hebrew words for "law" that were translated into one English word "LAW", which has caused great confusion in understanding Galatians. We are also studying about the Northern and Southern Kingdoms, who the lost tribes of Israel are and the return of Israel. And we are doing a study on the Covenants. The "Law", Kingdoms, lost tribes and covenants all fit togethere in the end days.

I wish you were here to study with us - everyone brings food and we have a great time studying together all day long. But different people have different needs so don't have any blinders on and let God take you where it will be good for you. It's nice to have you here.

I don't believe in fellowship anymore. I hang out with family, friends and business associates (approx in that order). Right now I'm off to my 35th High School reunion. Should be interesting because I got into the cult when I was in High School and I haven't been to any of the reunions ever. Though I have kept up with a few of the folks.

like 3cents most of my fellowship is with family and friends but i do talk and pray to god each day, and believe it or not i do find comfort from the rcc {ducking stones now lol}

My husband and I are affiliated with a splinter group that we're pretty pleased with right now. However, there is a poster named Out There who attends a church called 'The Church of God of Abrahamic Faith' that he says he is happy with (no JC is God, etc.). He mentions it on the open forum and gives details of how to reach them. John and I have also attended a fellowship that has potential called 'Have Bible, Will Travel' but I think that is pretty much a Missouri fellowship.

I fully relate to your plight, Doug. The biggest thing I missed after leaving TWI was the one on one fellowship with people with the same passion for God and His Word as I have. It's one of the reasons I visit GSC. But then, it sometimes seems the passions in Greasespot are more diversed than on the Bible. Some are passionate about everything else but the Bible. I have been a prolific witness and teacher since the ROA of '75. I still find myself witnessing and teaching at least a few times a week. Simple things that won't confront the entire error of churchianity, but enough that if there is genuine hunger, they just might figure out a lot of it on their own.

I considered a splinter group. But I don't want the TWI carbon copy of how a TWIG runs. I don't want to hear a bunch of people doing manifestations the way they did in the '70's. Above all, I don't want to partake of Communion just because it's Easter. I listen to radio station preachers on a regular basis to stay on top of my game as far as recognizing when they get off the mark. My stering wheel has heard more Bible than most anyone I associate with on a regular basis.

I've also considered running a fellowship. But, I'm not sure I can find a dozen people with the passion it would take to do it. On top of that, then you have to consider the tithing and all the other laws of the state.

The one thing I can advise is to stay true to your beliefs. People will ultimately consider you a 'Way Brain' for it, but the fact is, it's also a "Bullinger Brain" and a number of other greats in history. Continue memorizing scripture. It will come in handy.

I know a believer in Georgia that I mentored in the '80's. He is now running a fellowship and endeavoring to heal riffs between old believers of TWI and splinter groups. I have decided to send my abundant sharing to him. Find someone you think you can get behind and tithe. God will still bless you.

Hello all. I am just curious as to where most people go to fellowship after the Way. I joined a nondenomanational church last year,because I really missed the fellowship and studying the word.

I find myself taking what I need ,and trying not to pay too much attention to the things I know aren,t the truth.(ya know,the whole jesus is God thing). It was either that, or continue to isolate myself because I knew better. I never hide the truth, but I do not volunteer much either.Not best I know,but what am I to do? Any suggestions?I am so blessed that you are all here,Doug Simerly.(I will keep your name private,but as for me,what the heck)

I used to live in Portland. I know your brother and his family very well. Welcome to the cafe! I left twi almost 5 years ago, and life is good.

I've been to some wonderful churches since leaving, and I don't let the whole trinity thing get to me. I think TWI's doctrine about JC didn't put him in the place he needed to be. I've learned a lot more about my Lord and Saviour since attending churches. Jesus has much more meaning to me. He is the Head of the Church, right? I don't think he's absent.

Hi Doug and welcome. We tried different churches but it didn't work for us so we have fellowship in our home with a group of people.

Right now we are studying Galatians and learning that there are 5 Hebrew words for "law" that were translated into one English word "LAW", which has caused great confusion in understanding Galatians. We are also studying about the Northern and Southern Kingdoms, who the lost tribes of Israel are and the return of Israel. And we are doing a study on the Covenants. The "Law", Kingdoms, lost tribes and covenants all fit togethere in the end days.

I wish you were here to study with us - everyone brings food and we have a great time studying together all day long. But different people have different needs so don't have any blinders on and let God take you where it will be good for you. It's nice to have you here.

Edi, Sounds like some interesting stuff. I'd be interested in hearing what you're studying about the Law. Maybe a thread in doctrinal...?

My handle in here is 'YID'. It's not because I claim Jewish descent. My handle use to be, "YIdon'tgotochurch". But the space allowed in the chat room and in the forums only allowed for 'YIDON"T'.

People started calling me 'YID'. Others started asking how I came up with that name. I finally gave in and shortened it. Some know the history and know who I am.

Y I don't go to church is for the same reason I think others in here don't. I can't stand to listen to someone hack the Word into pieces. The minute they refer to I Cor 12 as the 'gifts of the spirit' or chapter 13 as 'the LOVE chapter', I'm outa here.

I think I know you, MaryLou, remember me? I used to be in Portland. I'm like you. I don't go to church, tried that, just couldn't get into it..... I also subscribe to some magazines. Charles Stanley from Atlanta. Try Truth for Today, they have put out some good books and many good articles. As far as fellowshipping with believers, try to find some in your area. I have not found any in my area but always looking. I would also stay away from the off-shoots, although I do subscribe to John Lynns but it just seems to close to the Way. PM me!