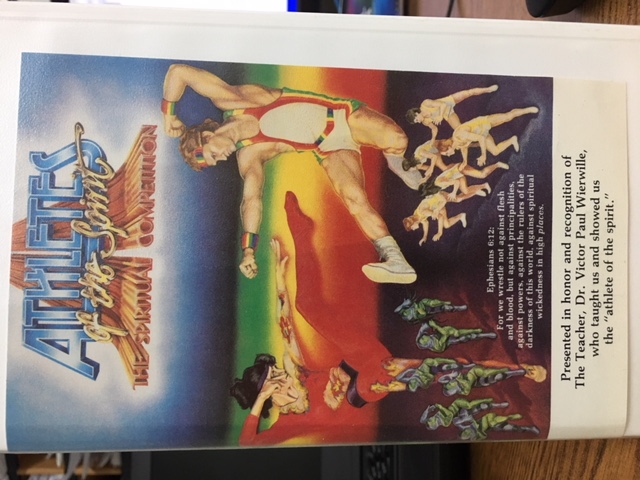 Anyone still have a copy of AOS? Would be interested in seeing this craziness from my childhood again.

OMG, I needed that laugh after paying taxes!!!

When AOS was current, we were all taught that a soldier kills an opponent, but an athlete tries to outdistance an opponent, therefore, calling believers athletes is better than calling them soldiers. Well, after further review...I disagree. Killing is not the only thing a soldier does.

My mother was put in foster care when she was 12. After 2 years of 3 foster homes that didn't work out, she was placed in one that did. This family had a 5 year old boy. My mother certainly helped raise him. He grew up, became a pilot, was shot down over Germany in 1944, and spent 14 months in a prison camp. I never met the guy; he died a year before I was born, but I've seen letters he wrote to my mom.

He said that with the exception of a month or so in which food was in very short supply, he was not treated that badly in the prison camp. The German soldiers didn't kill him, they held him captive. Whatever he did to oppose Germany, he could not do while he was in the camp. This reminds me of 2 scriptures: the one that says Christ led captivity captive, and the one that says he who now letteth will let until he be taken out of the way.

Just as those German soldiers held my mom's foster brother captive so that he was limited in what he could do to oppose Germany, we believers, who are the lights of the world, limit what the adversary can do to oppose, not only God's people, but the whole world. This strikes me much more like military than athletic. About athletic...

In the world, athletes get a lot of praise. Not just Tom Brady praise, but even  kids who plays T ball will get all kinds of love from whomever is supervising them. Also, in the world, athletes who play team sports have to compete with their own teammates for playing time. Some of those athletes are willing to do ethically questionable things to 'outdistance' their own teammates.

It seems to me that even before VP fell asleep, the tone of the ministry morphed from walking in love and being kind one to another, into judging each others' flesh thinking it was walking by the spirit. AOS exacerbated this. I'm leaning toward concluding that this was the game changer. I even suspect that LCM really believed that by enforcing the strict legalistic dogma which included the debt purge, homo purge, and unproductive evil purge in 1995, that God would give the increase and the numbers would come back to the ministry just like in the 70s.

"it's a jungle out there."...Randy Newman

Anyway,  back to the topic: